“2011 was supposed to be the year of the Android tablet. One year later, Android tablets have failed to meet expectations and for the most part have been unsuccessful,” Whitmore wrote in the note, according to Fortune. “This year, tablets had a much smaller presence as vendors appear to be placing greater emphasis on Windows 8.”

“We remain skeptical that Win 8 tablets will gain much traction this year,” he added.

Whitmore concluded that the move away from Android to Windows 8 will take time, creating a “favorable competitive backdrop for Apple’s forthcoming iPad 3.”

Whitmore, who based his chart on IDC data, isn’t the first one to assess how the PC market would look if iPads were considered part of the mix. In November, market research firm Canalys ran a similar calculation. Canalys, which did not provide data to support its findings, predicted that Apple would overtake HP as the world’s top PC maker “before the second half of 2012″ if you lumped in iPads.

Update: An IDC rep has weighed in on Whitmore’s chart: “It appears the Deutsche Bank analyst simply added Apple’s iPad shipment number onto the Apple total for Q3 to make his point (conveniently ignoring tablets made by other PC manufacturers, most notably Acer). And he also didn’t bother to add in iPad shipments over the previous quarters, leading to the rather distorted hockey stick on the end of the chart. Not exactly the best analysis or presentation of the data, in my opinion.” 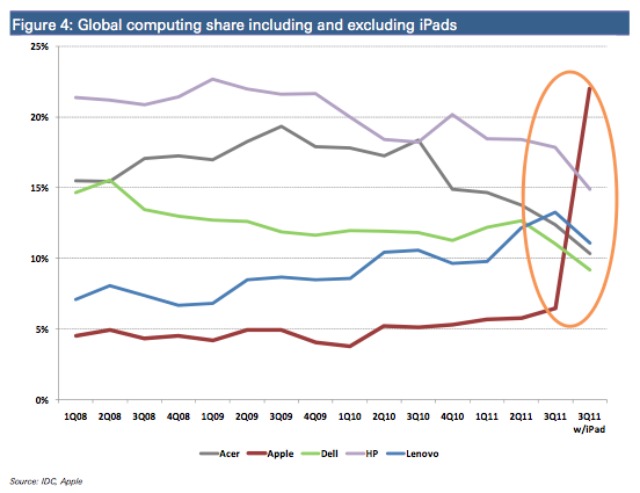