There are people—yours truly included—who felt genuinely dumbfounded having read both the authorized “Steve Jobs” biography by Walter Isaacson and Adam Lashinsky’s “Inside Apple.” Do not get me wrong, Isaacson and Lashinsky are among the best contemporary wordsmiths, and their work enlightened us with some previously unknown details about the inner-workings of Apple and the man who cofounded it. Nonetheless, the authors dedicated way too many pages to the stuff we already knew, and their writing style may not appeal to the Technorati accustomed to fast-paced news reporting and sensationalist headlines. Hoping to fill this gap and tell the untold story about Apple of California from a different angle, writer Ken Segall committed to a project tentatively named “Insanely Simple – The Obsession That Drives Apple’s Success” (via Daring Fireball).

Few would dare argue that Apple’s agonizing over the tiniest and seemingly unimportant details is what makes the products so pleasurable to use. Segall should know what makes Apple tick: He coined the iMac moniker during his 12-year tenure at TBWA\Chiat\Day, Apple’s and NeXT’s advertising agency, and he now runs an Apple parody website you are probably familiar with called Scoopertino. The author explained the reasoning behind his ambitious undertaking on his personal blog:

I’ve written a book. Something tells me you won’t be surprised when I tell you it’s about Steve Jobs and Apple. But this book is different. Really. That’s because (a) I had a unique vantage point to some pivotal events in Apple history, and (b) this book focuses on one thing alone — the core value that has driven Apple since the beginning.

The following excerpt from Segall’s blog explained why simplicity is the key mantra to Apple’s success:

Insanely Simple is about Apple’s obsession with Simplicity. You can see Simplicity in everything Apple does: the way it organizes, innovates and communicates. In fact, one could argue that it was Steve’s unrelenting passion for Simplicity that helped Apple rise from near-death in 1997 to become the most valuable company on Earth in 2011. [...] To Steve Jobs, Simplicity was a religion. But it was also a weapon — one that he used to humble competitors once thought to be invincible. Apple’s devotion to Simplicity is the one constant that can be traced from the first Apple II computer all the way to today’s iPad. Though the company’s success is built upon engineering and design skills, it’s the love of Simplicity that truly powers Apple, revolution after revolution. 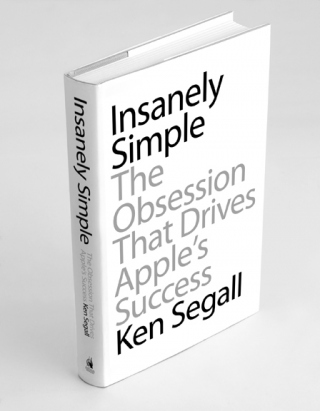